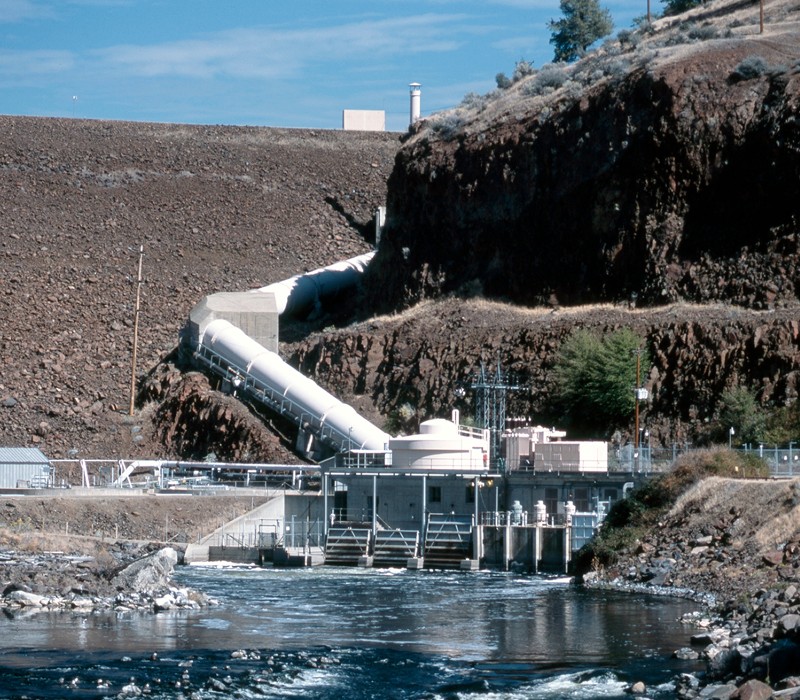 PacifiCorp’s 169-megawatt (MW) Klamath Hydroelectric Project (FERC No. 2082) is located in a predominantly rural area in southern Oregon. The project generates approximately 716 gigawatt-hours of emissions-free electricity on an annual basis – enough power to supply the energy needs of approximately 70,000 households.

Originating from Upper Klamath Lake in southern Oregon, the Klamath River flows more than 250 miles through southern Oregon and northern California before emptying into the Pacific Ocean near Klamath, California. The river drains an area of about 13,000 square miles. The U.S. Bureau of Land Management (BLM) owns several large tracts of land in the project vicinity and is responsible for the management of the designated Klamath Wild and Scenic Reach, which covers about 11 miles of the project’s total 64 mile length.

Built between 1903 and 1967, PacifiCorp’s Klamath Hydroelectric Project consists of seven hydroelectric developments and one non-generating dam. The U.S. Department of the Interior Bureau of Reclamation owns Link River Dam which PacifiCorp operates in coordination with the company’s hydroelectric projects. The Link River Dam, located upstream of PacifiCorp’s projects, controls storage within and releases from Upper Klamath Lake, the largest freshwater lake in Oregon. Water releases from Upper Klamath Lake through Link River Dam are directed by the Bureau of Reclamation to fulfill the primary objectives of regulating Klamath River flows to benefit fish and wildlife, meeting irrigation demands, and providing for flood control. Diversions for hydroelectric purposes occur after these objectives are attained.

All of Klamath's Hydroelectric Project developments use water from the mainstem Klamath River to generate electricity with the exception of one plant located on Fall Creek, a tributary to the Klamath River.

Keno Dam, located 22 miles downstream of the Link River dam, does not produce electricity but regulates the water level in Keno Reservoir as required by the operating license for the project issued by the Federal Energy Regulatory Commission and a contract between PacifiCorp and the Bureau of Reclamation.

The Klamath developments have a total of 12 turbine-generators; five limited storage reservoirs and five concrete or earth/rock fill dams. The project’s five reservoirs range in size from 40 to about 1,000 surface acres. The 173-foot earth and rockfill dam associated with the Iron Gate project is the tallest dam — it forms the 944-acre Iron Gate Reservoir. As the last development in the sequence of PacifiCorp’s Klamath hydroelectric facilities, Iron Gate serves as a reregulation facility for river flows downstream of the project.

In 2000, the FERC relicensing process was initiated for PacifiCorp's Klamath River project in southern Oregon and northern California. In February 2010, PacifiCorp and more than 40 other signatories executed the Klamath Hydroelectric Settlement Agreement (KHSA), which provides a framework for the potential removal of PacifiCorp's Klamath River dams.  See the links above for more information about the KHSA.

Following the submittal of its application for a new license in 2004, PacifiCorp began settlement discussions with a diverse group of stakeholders to resolve issues related to relicensing of the Project. PacifiCorp has worked collaboratively with this group of stakeholders to develop and enter into the Klamath Hydroelectric Settlement Agreement (as amended) (KHSA). The KHSA was signed by more than 40 organizations, including Federal agencies, the States of California and Oregon, Native American tribes, counties, irrigators and conservation and fishing groups on February 18, 2010. The KHSA was amended in 2016 to provide for the transfer and decommissioning of Iron Gate, Copco No. 1, Copco No. 2, and J.C. Boyle dams through the normal procedures of the Federal Power Act administered by the Federal Energy Regulatory Commission (FERC).

PacifiCorp agreed to a potential dam removal path for the Project and executed the KHSA based upon its assessment that the KHSA provided superior cost and risk protections for PacifiCorp and its customers as compared to continuing on a path of relicensing. This assessment is based upon the KHSA’s defined customer cost cap and protection afforded to PacifiCorp and its customers from any liabilities associated with dam removal. The public utility commissions in both California and Oregon have concurred with this assessment by endorsing the collection of surcharges from customers in those states to fund the customer contribution to dam removal costs.

The KHSA spells out the process to transfer the dams to the Klamath River Renewal Corporation, a non-profit entity formed for the sole purpose of implementing the KHSA and pursuing the decommissioning and removal of the dams. The KHSA includes provisions for operation of the dams and implementation of interim measures that PacifiCorp will undertake to improve water quality and fish habitat conditions, support and improve hatchery operations, and benefit environmental resources in the Klamath basin prior to potential dam removal.

Since the execution of the KHSA, PacifiCorp has been working diligently in cooperation with Parties to the KHSA and other affected stakeholders and regulatory agencies to implement its obligations under the KHSA and advance the settlement process.

Safety is a top priority for PacifiCorp. To ensure public safety at Klamath River recreational areas, emergency evacuation sirens have been installed at or near:

The sirens have been installed as a proactive measure to prevent delays in communication in the unlikely event that sudden flooding or rapid changes in water flows force evacuation of the campground or areas immediately below applicable dams, spillways or power plants. These sirens are not intended to communicate evacuation orders to residences nearby.

The sirens will not be used to alert people for other types of emergencies. Although individuals outside the recreation areas may hear the sirens, they are not expected to take any evacuation actions and should instead listen for emergency information from local authorities.

Any necessary evacuations at other Klamath River recreational areas will be conducted by PacifiCorp staff or local authorities as appropriate.

PacifiCorp has been working diligently in cooperation with parties to the KHSA and other affected stakeholders and regulatory agencies to implement its obligations under the KHSA and advance the settlement process.