PacifiCorp’s 510 megawatt (MW) capacity Lewis River hydroelectric facilities are located in rural southwestern Washington. The first dam site, Merwin, is approximately 10 miles east of Woodland, about 40 miles northeast of Portland, Ore. Constructed between 1931 and 1958, the Lewis River projects are located in a scenic area near Mount St. Helens in the Cascade mountain range. 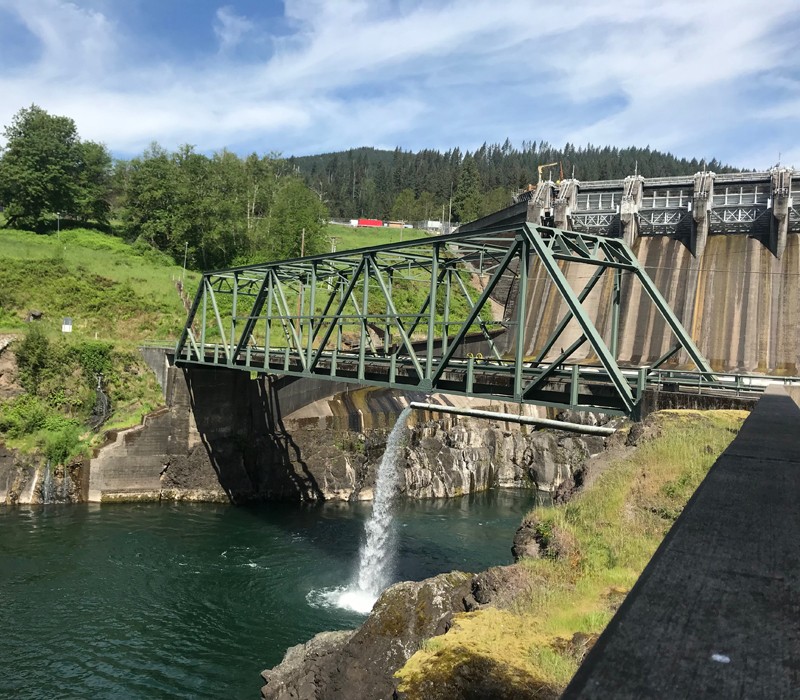 PacifiCorp’s 510 MW capacity Lewis River hydroelectric facilities are located in rural southwestern Washington. The first dam site, Merwin, is approximately 10 miles east of Woodland, about 40 miles northeast of Portland, Ore. Constructed between 1931 and 1958, the Lewis River projects are located in a scenic area near Mt. St. Helens in the Cascade mountain range.

Springing from Adams Glacier on Mt. Adams, the North Fork of the Lewis River flows past the southern flank of Mount St. Helens on a 90-mile path before emptying into the Columbia River near Woodland, Wash. Much of the drainage basin of the North Fork of the Lewis River lies within the Gifford Pinchot National Forest and the Mt. St. Helens National Volcanic Monument. Consequently, several state and federal resource agencies are involved in resource management in the project's vicinity.

Placed in service in 1931, the Merwin project has a generating capacity of 136 mw. The dam associated with this plant is a 313-foot high concrete arch type. It creates Merwin Lake, a 4,040-acre impoundment popular with a wide variety of recreationists.

The Yale project was completed in 1953. It features a 3,780-acre reservoir (locally known as Yale Lake, it also is a popular recreation site) and a main earthfill embankment dam that is 323 feet high. The two turbines in the Yale powerhouse were recently upgraded to a combined rated capacity of 134 MW.

At 240 MW, Swift No. 1 is PacifiCorp’s largest hydroelectric facility. When initially built in 1958, the 512-foot Swift Dam was one of the highest earthfill dams in the world. The Swift Reservoir is 4,600 acres and similarly provides a variety of fishing, camping, swimming and other recreation. The discharge of Swift No. 1 enters a canal that transports the water through the 70 MW Swift No. 2 project owned by Cowlitz County PUD No. 1 before it is returned to the upper end of Yale Reservoir.

Swift No. 1 Application for Non-Capacity Amendment of License for a Major Project - July 2020

Swift No. 2 Application for Non-Capacity Amendment of License for a Major Project - July 2020

Safety is a top priority for PacifiCorp. To ensure public safety at our Lewis River recreational facilities, emergency evacuation sirens have been installed at:

The sirens have been installed as a proactive measure to prevent delays in communication in the unlikely event that sudden flooding forces evacuation of these low-lying camping areas along the reservoirs. These sirens are intended to initiate evacuations of the identified recreation areas only and are not intended to communicate evacuation orders to residents nearby.

The sirens will not be used to alert people for other types of emergencies. Although individuals outside the recreation areas may hear the sirens, they are not expected to take any evacuation actions and should instead listen for emergency information from local authorities. Testing periods will occur outside of the normal camping season and will be communicated to nearby residents and property owners in advance.

Any necessary evacuations at other Lewis River recreational areas will be conducted by PacifiCorp staff or local authorities as appropriate.

Construction work began in April 2011 on new fish passage facilities at the Lewis River project. The new facilities collect adult fish at Merwin Dam and transport them upstream of Swift Dam where they are released to move up the river to spawn.

PacifiCorp and Cowlitz PUD are soliciting 2021/2022 proposals as of July 5, 2021 for Resource Project funding, Bull Trout projects and design-only projects to benefit fish recovery throughout the North Fork Lewis River, with priority given to federal ESA-listed species.

See information for the Aquatic Technical Subgroup, including aquatic monitoring and evaluation, and hatchery operating plans.